Goldenrod is any group of plants mainly of the genus Solidago of the composite family. These plants are identified by their clusters of normally yellow flower heads which bloom in late summer or early autumn. Most species of Goldenrod are native to North America and are prevalent along the eastern seaboard and in the prairies of the Midwestern plains. There are some types of goldenrod that are harmless but the most notable species of goldenrod are invasive and need to eradicated. Which is the best brush cutter to remove this pesky plant? If your yard is being invaded by goldenrod, we highly recommend using Orec’s Cyclone Flail Mower as soon as possible.

There are quite a few different species of Goldenrod, with some of the most common being Canada (S. Canadensis), Showy (S. Speciosa), Blue Stemmed (S. Caesia), Gray(S. Nemoralis) and Sweet Goldenrod (S. Odora). 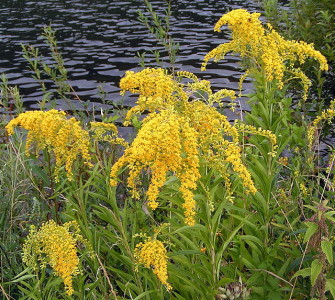 While there are some friendly varieties, many species of Goldenrod can be harmful to your yard and garden.

It’s important to note that not all goldenrod is bad. As a whole, goldenrod is an edible plant known for its nutritious qualities that is often used in tea and as a dry herb. There are also a number of “good” varieties of goldenrod. For instance, Solidago Rugosa or Fireworks is a goldenrod cultivar that is relatively harmless to other plant life and whose vibrant yellow provides a solid contrast in late summer and early autumn garden borders. Goldenrod is also sometimes blamed for causing allergies, or “Goldenrod hay fever” as it is often called. This is, in fact, not true—goldenrod’s pollen is sticky, and does not go airborne.

Why is Goldenrod Harmful?

While there are quite a few “good” types of goldenrod, the most commonly known species are usually infamous for their invasive or “weedy” properties (among these Canada and Tall are some of the most pesky). The main reason for their invasive nature is that goldenrod species colonize both above ground by spreading their seeds and below ground via their rhizomes. With such a rampant ability to colonize, these goldenrod species can soon take over a garden or small yard, choking out all other native perennials. If allowed to spread for too long, the goldenrod infestation will make it hard to take back your yard or garden, so you need to begin defoliation with the best brush cutter you can get your hands on (Orec recommends the Cyclone Flail Mower)as soon as you notice goldenrod in your yard or garden.

The Best Brush Cutter to Get Rid of the Goldenrod in Your Garden.

Spraying to try to get rid of goldenrod can do more harm than good. For one thing, the herbicide will do damage to the larger plant population as well. With their durable nature and rampant colonization, goldenrod can benefit even more from spraying as the native species will often sustain more harm than the goldenrod, allowing it to spread even more.

A better plan would be methods of repeated defoliation such as weeding or mowing. Weeding, however, can be both time-consuming and exhausting—which makes mowing a much less tiring and a much faster option. This is where the best brush cutter for the job comes in. The Orec Cyclone Flail Mower is the perfect cure for that annoying goldenrod! 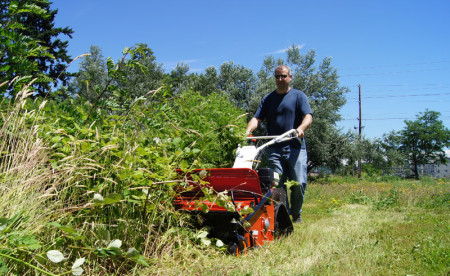 Use the Cyclone Flail Mower to take out Goldenrod!

The 38 flail blades provide a fine mulching cut, meaning that once you’ve gone through the field the first time, you won’t have to go back and cut any goldenrod still standing. What’s more, the cutting height is adjustable from 2” to 4” so that you can cut the plants down to their stems. With our Cyclone Tracked Flail Mower, you can carefully maneuver around any plant or grass species that you wish to keep, allowing you to focus in on the goldenrod and other species that you want to eliminate.

The Orec America Cyclone Flail Mower will take care of that goldenrod that you don’t want, making it much easier for you to take back your yard or garden!