Clearing Brush: The Dangers Of Invasive Plants And How To Get Rid Of Them

What are invasive plant species?

[dropcap]I[/dropcap]nvasive plants, or non-native plants, are species of plants introduced to an area where they are not native. These are usually plants and shrubs from exotic locales that are most often brought into their non-native environments via planting or through disposal of their seeds into storm drains or compost piles. These plants tend to thrive in their non-native habitat due to lack of competition and predators can spread very quickly, taking up valuable natural resources from other, native plant species. This is why brush clearing these plants is so important: if you aren’t clearing brush quickly, they can spread over an entire lawn or field.

Why are invasive plant species bad?

Once introduced, invasive plants compete with native plant life for natural resources with the native species often losing out. The combination of the invasive species having evolved through competition with other native species, along with the infested area’s native species lack of competition with invasive plants means that the native plants cannot get the resources they need to survive. What’s more, the invasive species can also introduce non-native diseases, parasites or predators that can further hasten the destruction of surrounding plants. All of this can lead to the invasive plant species taking over a given area, making it all but impossible for other plant species to survive.This infestation not only impacts the visual aesthetic of an area but can also impact the water quality, the availability of food and habitat for native animal life and can introduce predators and disease that can harm not only plants but animals. The annual worldwide cost of eradicating invasive plant species is estimated at $120 billion, which means that not only a large amount of money but time and manpower that could be spent on the protection of endangered native species is instead spent on first trying to get rid of invasive species.

What are some common invasive plants?

Some of the most common invasive plants species include:

Arrival: Introduced by colonists in early 1700’s as an evergreen groundcover.
Impact: An aggressive-spreading vine that kills trees by restricting light. Prominent on both the east and west coasts.
Alternative native species: Creeping Mint, Allegheny Spurge and Creeping Phlox.

Arrival: Introduced to the US as an ornamental or as livestock fodder in the 1800’s.
Impact: Found mainly on the east and west coasts, forms dense strands that crowd out native species and destroy wildlife habitat.
Alternative Native Species: Vernal Witch Hazel

Arrival: Introduced to the US as a yard plant and for berries in the late 1800’s
Impact: Stretching from British Columbia to Southern California, produces 7,000-13,000 seeds per square meter. Chokes native plant life.
Alternative Native Species: Marionberry or Boysenberry, Red Raspberry, Black Huckleberry

How can I get rid of invasive species? 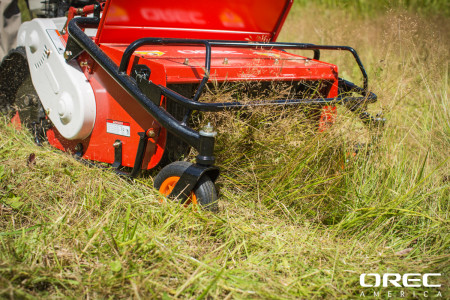 The Mulching Power of the Orec Cyclone Flail Mower will help you brush mow invasive species quickly and easily.

Due to the invasive plant’s impenetrability and variety of reproductive tactics, it can be extremely difficult to eradicate invasive plant species once they have taken over a given area. Removal normally occurs in two separate phases: removal of the above ground vegetation and killing or removing the root crowns and major side roots.
Brush clearing by using a brush mower or cutter has been shown to be not only an effective means of removing above ground vegetation of invasive plants but less harmful on native plants than chemical means such as herbicides. Also the use of a brush cutter allows for more selectivity in keeping desired native plants in the area than chemical or other means.

The Orec America Samurai Walk Behind Brush Cutter is the best walk behind rotary brush cutter on the market if you want to get rid of those invasive plants. It features the only adjustable cutting height (from 2” to just under 4”) on the market, clearing brush all the way down to the stem. The front wheel makes it easier to maneuver the Samurai around obstacles and to avoid cutting native plants that you wish to keep. The three speeds (gear) and variable speeds (hydrostatic) give you the control you need to get the job done right and get it done quickly. 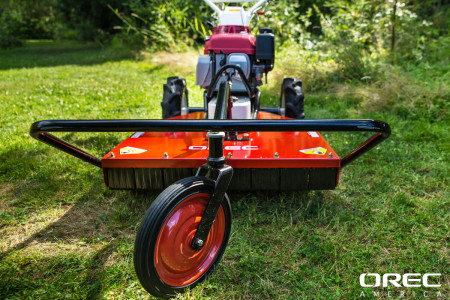 The Orec America Cyclone Walk Behind Flail Brush Mower is another excellent option for selective removal of above ground vegetation of invasive species. The 38 flail blades work in tandem to mulch the plant material, leaving less material to remove by hand and making that material easier to dispose of. The flail system can pull in vines such as blackberries of up to 4’ tall and can mulch even thicker plants such as English Ivy and Scotch Broom. As a walk behind brush mower option the Cyclone Flail Mower gives you greater control (especially the tracked version) that will help you eliminate the invasive plants even in tight corners and can help you to avoid cutting the native plant species that you want to keep around.

So clearing brush to get rid of invasive plants that have sprung up in your yard or field, look no further than the Orec America line of brush mowers. With Orec America you’ll get the job done right the first time