English Ivy can be a sneaky little bugger. When I think about those leafy, dark-green vines, it is often with a sense of nostalgia mingled with wonder. I can just see that brick wall through the brown vines at Wrigley Field, giving way to the dark green vines day by day as spring turns into summer. Those brown walls in my mind’s eye soon become the walls and buildings of my old college campus, where the ivy that faded with autumn was just as exciting as the ivy that blossomed with the coming of spring. Ivy can be an inspirational, spiritually calming plant when it is kept within the confines of a college campus or a pro baseball field; however, when it is brought to your garden, it can become an out-and-out menace. In this article we’re going to look at some of the reasons why English Ivy can be so harmful to your yard or garden and then I’ll suggest some of the best means available for ivy removal.

Where did all that ivy come from?

English Ivy, as with many species of non-native plants, was first brought to North America by immigrants for use as a landscape plant. It spread in popularity as people were not only attracted by its quaint charm, but by its use as a vine that could drown out sound as well as keep the nosy neighbors from looking in through the fence. However, it soon became clear that, along with its charm, English Ivy was a terribly invasive plant that could take over a yard or a garden within a relatively short amount of time.  Thus, although English Ivy is so prevalent and can have a certain allure to new homeowners, those who have lived with ivy for some time and know its true nature are often looking for the most effective ways of ivy removal. 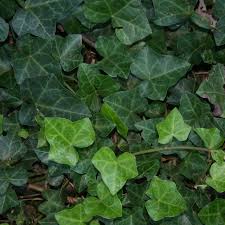 Ivy can’t be that bad..can it?

So what is it exactly that makes English Ivy such a menace to your lawn and garden? As mentioned above, Ivy is a very invasive plant, capable of displacing other, native plants in your garden in just about no time. Not only that, ivy can weaken trees as it girdles the tree’s trunk when it climbs. When it then reaches the upper branches, it clings to those branches and can act as a sail in strong winds, making it easier for branches to snap in storms. Aside from being an invasive plants, English Ivy can also house all sorts of unwanted visitors to your garden. It makes the perfect home for rodents such as rats as well as for garden pests, including snails and worms. Along with those critters living in the English Ivy, the leafy green troublemaker also houses dust, pollen, and rodent manure that can really be a pain for those who have allergies or compromised immune systems. With all the problems that it can cause, it’s no wonder that the allure of English Ivy can soon give way to irritation, making ivy removal the number one priority for the stressed-out homeowner. 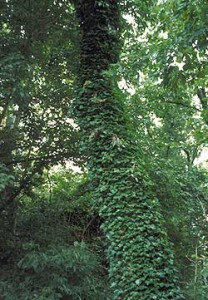 English Ivy can be pretty, but it can also be pretty deadly to your plants and trees.

Okay now, you’ve got that patch of ivy on your lawn and you want to get rid of it, so what do you do? One thing that you should not do is attempt to use herbicides. It’s a common myth that herbicides are an effective means to kill English Ivy. With their waxy green leaves, English Ivy can repel herbicides fairly easily; those herbicides can then run off the ivy and on to the plants that you’re trying to save. Another, more popular and effective method Is to peel back the ivy like a roll. Using this method, you would find an edge to the ivy – or you would make an edge with a sharp shovel or other edging tool – and then you would pull the ivy back like a sheet. However, this is a pretty labor-intensive method, especially if you have large patches of ivy that may take you more time and effort than you really want to spend.  There is another means of ivy removal that takes much less effort and can be done in next to no time. 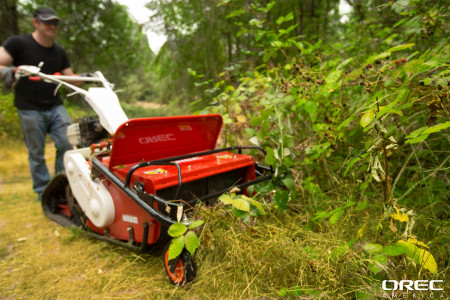 Brush cutting your ivy can help you get rid of it quickly, and you can use the power of the mower to remove the ivy instead of your own elbow-grease. You’ll want to be choosy about which mower you use though – many rotary brush mowers won’t cut the ivy consistently and can often leave vines standing. Your best bet is to use a flail mower, like Orec’s Cyclone Walk Behind Flail Mower.  The flail knives of the Cyclone will cut off and then mulch the ivy into pieces, and it won’t leave any of it left standing. Once you mulched that English Ivy with the Cyclone, all you have to do is bag and dispose of it, since you won’t want to leave the ivy in the compost pile because ivy re-roots very well. Finally, if you want to make sure you don’t have to deal with that charming pest that is English Ivy ever again, you can lay a mulch of shredded bark or wood chips that will keep the ivy from growing back (please consult with a gardening expert for the depth and type of mulch that is right for you).